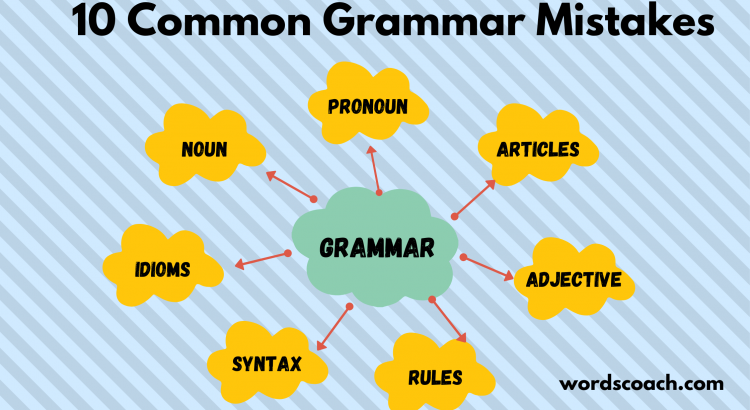 English is the most widely spoken language worldwide. And English grammar is important in every aspect of life. Grammar mistakes are not trivial. It can make your impression from hero to zero. You can lose your credibility at your work if you make grammatical errors consistently. It seems daunting, right? Well, it’s not dreadful if you learn some common mistakes, and using it correctly is incredibly rewarding.

Here, is a list of some common grammar mistakes you should keep in mind to improve your language. It can come in many forms. Let’s dig into it.

10 Grammar Mistakes You Should Avoid

1. Use of the Wrong Tense

Tenses are the pillar of English grammar. We have learned tenses when we were kids. However, still, we sometimes do make mistakes in their usages. Have a look at some of the common errors.

On the off chance that you need to brush up your skills of tenses, at that point refer to our article on tenses.

2. The Omission of the Preposition

In some conditions, we unnecessarily omit prepositions. Let’s see, what are they?

Here, is a list of other words that need to be used with prepositions.

Sometimes we misplace the adverb in a sentence. Look at some examples for understanding.

There are many words in English language that sound the same. But they are very different in meaning and spellings. Making mistakes in using them can be humiliating. Let’s have a glimpse of some of them.

“There” is highlighting toward a place, indicating direction. It also has an abstract function, for figurative places, as well as used in statements of fact, ordinarily in “there are” and “there is” constructs. On the contrary, “Their” is pretty straightforward. It always suggests possession by people or things. All the more explicitly, “their” is a possessive pronoun. It substitutes the noun in a sentence.

As a rule, nouns in English grammar take no article when used in a general sense, but if they are used in a particular sense the article is needed. Let’s look at some examples.

Some examples are given below:

Commas are significant for clarity and give the reader a chance to pause in the sentence, it’s possible to use commas when you don’t need them. These superfluous commas can be confounding to read, and they make writing look less professional.

To summarize, it was a list of some of the grammar mistakes you should avoid losing your credibility. At whatever point you’re in doubt about a rule, take a brief moment to look it up. You’ll save yourself some humiliation.

Written by,
Jaini Bhavsar (There’s always room for bliss.)
3rd July 2020
Connect with me on LinkedIn

One thought to “10 Basic Grammar Mistakes You Should Avoid”