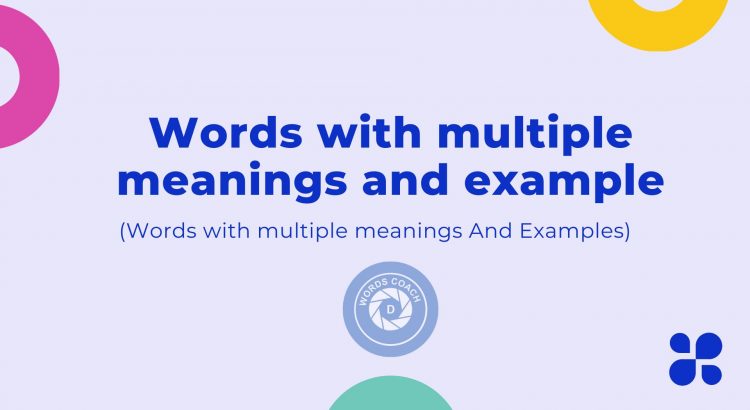 What do you call words with multiple meanings?

Words with multiple meanings And Examples

Homographs are examples of words that are spelled the same but are pronounced differently.

She tied her hair up with ribbon and made a little bow.

Pierre slung the bow and arrows over his shoulder and trudged into the forest.

When Mae meets her grandparents, she always bows to greet them.

My father doesn’t like Simon. He thinks he’s leading me astray.

We finally have a lead in this case – the man we just interviewed says he knew the victim!

Car batteries and ammunition are often made with lead.

My tickets show that I am in Row C.

Lee wakes up every morning at 5 am to practice rowing.

Hiya and Ishita often row about who gets to play video games.

The dog’s bark was so vicious that I ran away, terrified.

She went to the salon to get her nails done.

Claire drilled a nail into the wall to hang up a picture.

I nailed that exam – it was far too easy!

“The Grapes of Wrath” is John Steinbeck’s best novel.

The steam engine was a novel invention that changed the way people traveled.

My favorite season is winter because the snow is so magical.

The recipe says to season the dish with plenty of salt and pepper.

She squashed my dreams of ever becoming a famous singer.

My dad made butternut squash soup for dinner.

I hate carrying my racket around when I have tennis practice – it’s so huge and annoying.

I couldn’t sleep with the racket coming from the party next door.