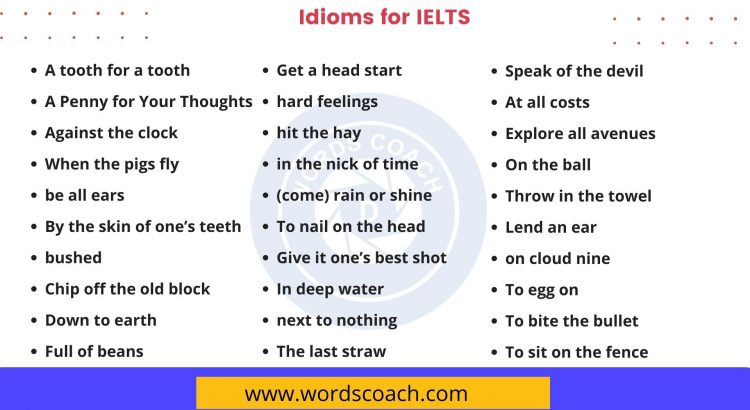 A Penny for Your Thoughts – asksomeone who is being very quiet about, what is on their mind.
Example: For several minutes they sat silently, then finally she looked at him and said, “A penny for your thoughts, Walter.”

be all ears – eager and ready to listen
Example: I’m all ears, waiting to hear your latest excuse for not getting this job done!

By the skin of one’s teeth – barely
Example: I was saved by my friend by the skin of my teeth from the rushing car.

bushed – tired.
Example: I am totally bushed after staying up so late.

Down to earth – practical and realistic; Back to reality
Example: It’s time we were brought down to earth to figure out a difficult situation, and offer a good solution.

Full of beans – A person who is lively, active and healthy.
Example: I really enjoy being with my best friend because he is always full of beans.

Hard feelings – the emotion of being upset or offended.
Example: I am sorry I have to fire you. No hard feelings, okay?

Fresh/cleanout of something – have sold or used up the last of something
Example: I have to go buy some more milk. It seems we’re fresh out now.

Give it one’s best shot – do the best that one can
Example: This test question is really tough! I’ll give it my best shot, and I’ll get some marks for doing my best.

In deep water – in difficulty; in trouble or a dangerous situation
Example: He has not submitted his dissertation so he’s in deep water.

Next to nothing – to cost very little
Example: I went to the new discount store and bought these new shoes for only five dollars. That’s next to nothing!

At all costs – do everything you can to achieve/succeed something
Example: My dream is to become a successful businessman and I will work hard for it at all costs

Explore all avenues – investigate every possible means to find a solution to a given problem or to achieve the desired outcome.
Example: We need to explore all avenues before doing something that is not very safe to a great number of people in order to minimize unfavourable consequences

On the ball – active and aware of things
Example: Our staff is really on the ball to get projects done on time.

Lend an ear – to listen carefully and in a friendly way to someone
Example: If you have any problems, go to Claire. She’ll always lend a sympathetic ear.

To egg on – To encourage someone generally in an unintelligent way.
Example: He continued rash driving while he was being egged on by his foolish friends.

To bite the bullet – To do something difficult that one is apprehensive about.
Example: Since he was the bread winner of the house, he had to bit the bullet and take that job.

Read More: Idioms to use in conversation!

To sit on the fence – Be indecisive about something
Example: He sat on the fence for a week and still couldn’t come to any conclusion.

To nail on the head – Find an exact solution to a problem.
Example: All of them were drained and about to leave when Alexis came with an idea that nailed on the head.

The last straw – The final stimulus that aggravates the situation.
Example: I was managing all the nuisance created by the students in the class until the interval bell rang as a last straw.

(come) rain or shine – means something will happen regardless of any difficulties.
Example: I will be on time for the class, rain or shine. Come rain or shine, she is always smiling.