Home » article » Know about Articles and their Usages with Examples 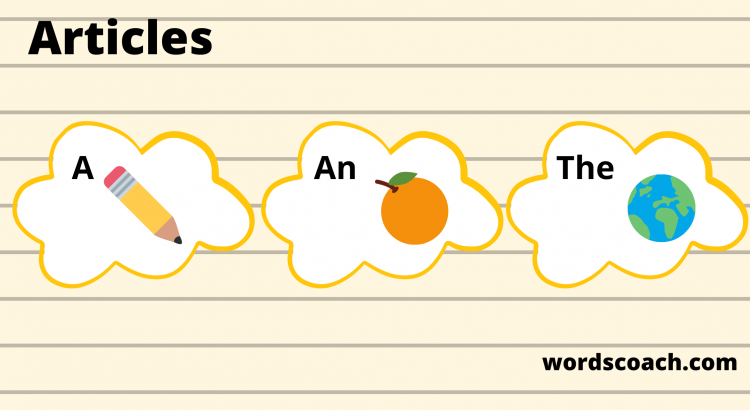 What Are Articles in English Grammar?

Articles in the English language are somewhat complicated. There are many rules you need to be aware of! You can get a good grip on it through listening and reading. On condition that all the rules and types of articles are there in your mind. Here, we have listed types of articles and their usages with examples. Let’s take a deep dive into it and be proficient in using them.

What are the articles?

There are three articles (A, An, The) in English grammar. Articles are used before a noun, an adjective, and an adverb. For instance,

What are the types of articles?

There are two kinds of articles in English grammar: definite and indefinite. Let’s recognize them with examples and know their usages.

Rules of Using Articles with Examples

Ex– I saw a movie last night.
My brother bought a computer.
Somebody call an officer!

Ex- I am an Indian.
My mother is a doctor.
I see Sam once a week.

Ex- My mother gave me a book.
I saw an accident yesterday.
I’d like an apple and two oranges, please.

Ex- A bird has two wings.

Ex- Carl bought half a kilo of tomatoes from the market.
These books weigh two and a half kilos.
It was quite a good book to read.

Ex- I saw the lion at the zoo.
I am going to the hospital.
Let’s go to the beach.

Ex- The shark is a meat-eating fish.
The whale is an endangered species.

Ex- Do the rich pay their fair share?
How can the poor save capitalism?

Ex- This is a dog. The dog is black.
I bought a skirt yesterday. The skirt was at a very reasonable price.

Ex- The great Taj Mahal is the jewel of Muslim art in India.
The beautiful red fort is famous for its gardens.

Ex- The Shawshank Redemption is one of the best movies, I have ever seen.
Moraine Lake is one of the most beautiful places in the world.

Here is the list of other usages of the definite article.

Hence, we have seen the various usages of both types of articles. However, it is also important to know when not to use articles in sentences.

Ex- Father will buy me a new laptop.

Ex- My mother goes to church daily to pray.

Ex- I had dinner early today.

Ex- I like to play cricket.
My brother is good at math.

To conclude, articles are pretty important in English grammar as they come up with information about the noun precede. Learning articles is cardinal as misuse or absence of an article will make a sentence look peculiar.

Read other blogs on English Grammar from here

Written by,
Jaini Bhavsar (There’s always room for bliss.)
26th June 2020
Connect with me on LinkedIn

One thought to “Know about Articles and their Usages with Examples”