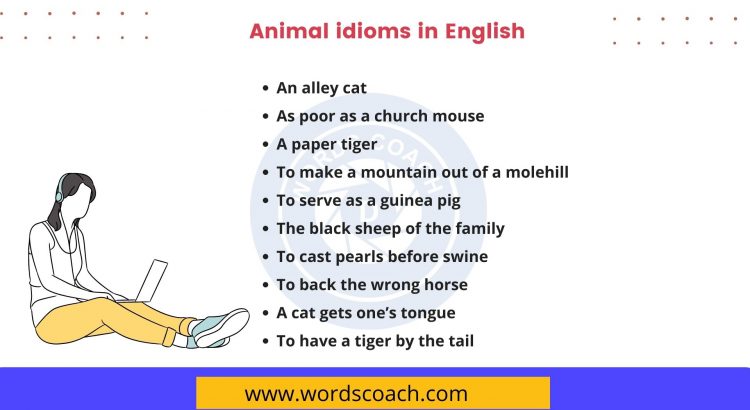 An alley cat – a homeless, usually mongrel, cat that scavenges for food in alleys, streets, etc.

Example: While she finds him amusing, an alley cat isn’t her type.

As poor as a church mouse – extremely short of money.

Example: They’ll take one look at my clothes and know I’m as poor as a church mouse.

A paper tiger – a person or thing that appears threatening but is ineffectual.

Example: The Soviet Union was suddenly revealed as a paper tiger.

To make a mountain out of a molehill – exaggerate the importance of something trivial.

Example: You’re making a mountain out of a molehill. You wrote one bad essay – it doesn’t mean you’re going to fail.

Example: We’ll have a limited release of the product and let this region serve as a guinea pig. If it is received well, we can expand production and distribution to the rest of the country.

Example: The black sheep of the family might be called it, the one despatched to Australia to live on a monthly remittance from home.

To cast pearls before swine – offer valuable things to people who do not appreciate them.

To back the wrong horse – make a wrong or inappropriate choice.

Example: In all his years as a book publisher, he rarely backed the wrong horse.

A cat gets one’s tongue – an expression that is used when someone is quiet and isn’t talking or responding when you expect them to.

Example: You’re breaking up with me? I don’t know what to say. Cat’s got my tongue I guess.

To have a tiger by the tail – have embarked on a course of action which proves unexpectedly difficult but which cannot easily or safely be abandoned.

Example: If you push me down again you might find that you have a tiger by the tail.