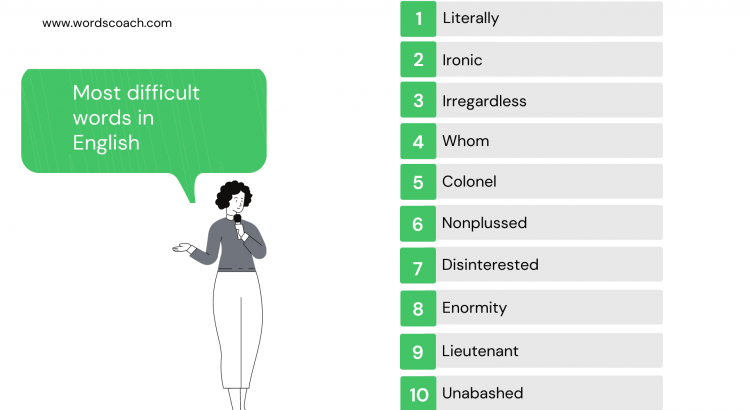 English can be a real pest, and even native speakers find themselves stumbling over some stubbornly tricky words. Sometimes they’re difficult to understand, other times they’ve been misused so often that their original meaning has gotten lost.

Pronunciation can also be a problem. As a follow-up to our article on confusing words, here are ten of the most difficult words in English.

Here are the most difficult words in English.

Definition: In a literal manner or sense; exactly.

If you know a language purist, watch out. Misuse of this word has been known to raise people’s blood pressure. ‘Literally’ means, “in a literal sense”, or “what I’m saying is not imagined, but truly happened as I’m saying it.” Therefore, popular uses like “I literally died laughing,” or “He was so embarrassed his cheeks literally burned up,” are not correct.

A. It was so easy to target and literally harass our community.
B. Officials seldom step in to stop a fight unless one participant is being pounded into a vegetable or until the fighters bring the action literally down to the ice.
C. It’s going to literally take years to see the effects of this time on the industry.

Definition: Using or characterized by irony.

Here is a word that has confused almost all English speakers – native or otherwise. While irony is often understood to mean a coincidence or strange turn of events, that in itself doesn’t cover its full meaning.

While the concept of irony is extremely multi-layered, at its most simple it’s a way to use words to express the opposite of their literal meaning. However, unlike sarcasm (which also does this), the irony is not intended to hurt. But wait! There’s also dramatic irony, situational irony, historical irony, and others.

A. In its own ironic way, Halloween has always offered a brief respite from real-world horrors.
B. That’s quite ironic coming from the head of a company whose products are used in operations that contribute to serious human rights violations.
C. The collection, which includes 15 pieces, reflects Abloh’s signature “ironic” style.

Irregardless is a word sometimes used in place of regardless or irrespective, which has caused controversy since the early twentieth century, though the word appeared in print as early as 1795.

You might have heard people use ‘irregardless’ when they mean to say ‘regardless’. ‘Regardless’ means “without regard” or “despite something” and is perfectly acceptable.

Definition: Used instead of ‘who’ as the object of a verb or preposition.

Who knew such a little word could be so confusing! In English, we use ‘who’ to refer to a sentence’s subject and ‘whom’ to its object. But how can you tell which one you need? Try answering your own question with ‘him’ or ‘he’. If ‘him’ could be the answer, ‘whom’ is your word.

A. He saw the faces of those whom he loved at his birthday celebration.
B. She saw a lady whom she presumed worked at the store, and she asked her a question.
C. The man whom you met on Saturday is coming to dinner.

Definition: A rank of officer in the army and in the US air force, above a lieutenant colonel and below a brigadier or brigadier general.

This is a pronunciation bungle for many students! When you look at this word, you might think it’s pronounced co-lo-nel. And who could blame you? It’s not so simple, however, as it’s pronounced kernel. But how did ‘colonel’ end up being spelled like that?

A. The colonel’s prestige and influence within the military ascended accordingly.
B. The colonel respectfully informed His Majesty of Balashev’s mission, whose name he could not pronounce.
C. His family was Sienese in origin, and his father, Colonel Domenico Pecci, had served in the army of Napoleon.

Definition: So surprised and confused that one is unsure how to react.

Feeling a bit nonplussed after our brief trip through linguistic history? It’s certainly possible. We’ve arrived at our sixth difficult word, another where a sneaky prefix is a culprit. Because the prefix -non means “not”, some people misuse ‘nonplussed’ as ‘unfazed’ or ‘uninterested’. In reality, ‘nonplussed’ means “bewildered” or “at a loss of what to think”. Unfortunately, their word is so often used in both ways that, at least in written English, it’s often difficult to understand which meaning the writer intended.

A. The captain, nonplussed, looked at Marius, and Florimond surprised the look.
B. They were nonplussed, but their boss had not lost his nerve.
C. He looked at Druel with such composure that the latter for a moment was nonplussed.

Definition:
A. Not influenced by considerations of personal advantage.
B. having or feeling no interest in something; uninterested.

A. Never believe, however disinterested the love of a kept woman may be, that it will cost one nothing.
B. The disinterested historians state ingenuously that Joanna was not guilty of this crime, although the others accuse her of it.
C. “Then, for once, I’ve found a disinterested female in a coaxing mood,” replied this modern Diogenes.

Definition:
A. the great or extreme scale, seriousness, or extent of something perceived as bad or morally wrong.
B. A grave crime or sin.

This one’s a biggie! It seems simple enough. ‘Enormity’ is so close to ‘enormous’ that they must be synonyms. Right? Wrong! ‘Enormity’ means ‘extreme evil’ of the toe-curling, medieval history or ruthless dictator kind.

A. We’re not going to stop causing the enormity of harms we do to animals because we care about chickens and pigs—it’s going to be because we create a new technology that renders the current system obsolete.
B. This is the last CEO Daily of 2020, and I am struggling with how to capture the enormity of the year in 300 words.
C. A Google Doc of incarcerated Americans who have died from the disease shows the enormity—and anonymity—of the toll.

Definition: A deputy or substitute acting for a superior.

Another military term to confuse us! This one is an example of different pronunciations of “across the pond” or between the US and UK. In British English, the word is pronounced leftenant, whereas in the United States, you’ll hear loo-tenant. While both locations have kept the same spelling – you know, just to make it interesting! – the US pronunciation is heard increasingly often in other English-speaking countries.

A. The allegations detailed by her and two other detainees in that filing also involved a lieutenant who detainees said was promoted even after women complained.
B. Giannandrea does not have a clear top lieutenant, so if he were to depart Apple, it’s unclear who would replace him or if Apple would fold the unit back into the Software Engineering department.
C. As lieutenant governor, Mallott still lived in Juneau and had long used the luxury hotel for extended stays and as a second office while in Anchorage, friends said.

Definition: Not embarrassed, disconcerted, or ashamed.

What’s that prefix doing on an unfamiliar word like “abash”? Well, while “abash” does exist, it hasn’t been widely used for centuries. The negative version, unabashed, on the other hand, is used today and means “not embarrassed”.So next time you’re practicing your English, speak with unabashed enthusiasm!

A. “Oh, you may have a chance yet,” continued the unabashed young man.
B. Her eyes held him briefly, unabashed at what they might tell.
C. It linked that time with this, as Madame Beattie, in her unabashed self-seeking, linked it.