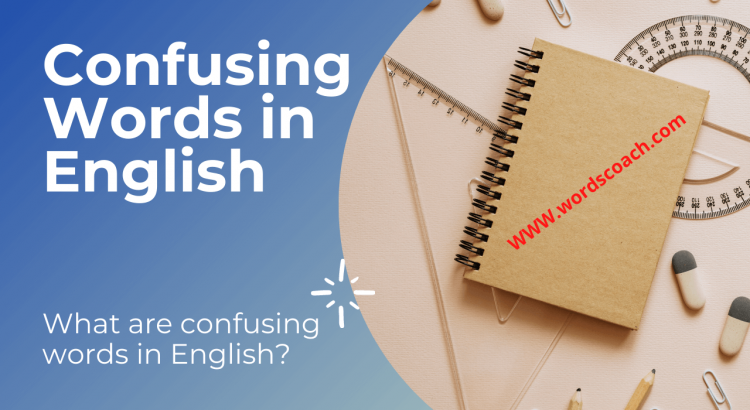 Your word might be spelled right, but it may be the wrong word. English is full of confusing words that sound alike but are spelled differently. It’s also full of words that share similar meanings that are easy to misuse. Below are some of the most commonly confused and misused words in English.

Affect is a verb whereas Effect is usually a noun.

Examples:
A. The war has affected all sectors of the economy.
B. The effect of the war is enormous.

Dessert is a sweet dish, while the desert is a hot, dry place which is often full of sand.

Examples:
A. A dessert is always welcome, especially this simple, one-layer snacking cake.
B Early on, we took an 11-mile walk around the then-deserted Mall.

Buy is a verb whereas by is a preposition.

Examples:
A. It is very old, they say, and worth a great deal of money, if you could find the right man to buy it.
B. From the near-by barracks troopers craned through windows, and gathered in doorways.

Example:
A. I accept your invitation with a lot of joy.
B. I like most vegetables except for carrots.

A principle refers to a basic truth, law, or assumption whereas principal refers to the first or foremost.

Example:
A. They are not the principles of a province or of a single continent.
B. The Marquis made a round of the principal of those mansions.

To assure someone means to remove doubt or reassure them, while ensure means to make certain that something happens.

Example:
A. I assure you that I will pass this exam.
B. The teacher ensured that this chapter will come in the exam.

Advice is a noun and advise is a verb, so you can advise someone by giving them good advice.

Example:
A. My mother always gives good advice.
B. I advised him to look for another job.

8. All ready vs Already

All ready means Everything is ready whereas Already means Happened earlier.

Example:
A. It’s difficult to see all ready in a sentence.
B. The sun was already up when they set off.

Weak means that something is not strong, or it can break easily. But week is a measurement of time, meaning seven days.

Example:
A. The shelf is too weak to hold all of those books.
B. Our family is going on vacation for three weeks.

Knew is the past tense of the verb know whereas new refers to something fresh, recent and not old.

Example:
A. She did not need a great cook-book; She knew how much and what it took To make things good and sweet and light.
B. The West and the East were met in conflict,—the old and the new, the stale and the fresh.

Example:
A. Can I borrow your car?
B. Sorry, I cant lend it to you today.

Your personal details include your name, age and nationality, while personnel means the employees of a company.

Example:
A. The girl held herself rigidly from any personal intimacy with her fellows.
B. Three classes have thus far been named as the personnel of any Society.

There is an adverb of place which we user to talk about where something is. Their is a possessive pronoun that we use to talk about something that belongs to a group of people.

Example:
A. It was their dream to purchase a BMW.
B. He has lived there for 20 years.

A complement is related to completion, while a compliment relates to flattering words or acts.

Example:
A. Her dress perfectly complements the shade of her eyes.
B. John gave a nice compliment for my weight loss.

Two refers to number 2. Too refers to also or additional whereas to is a preposition indicating direction.

Examples:
A. I own two properties.
B. I cannot eat too many rice in one go.
C. She went to a new restaurant opened near her house.

Lose is a verb which means to suffer a loss, to be deprived of, to part with whereas loose is an adjective used to describe things that are not tight or contained.

Example:
A. If you will lose money again, you will get a punishment.
B. The dress is too loose for my liking.

Right refers to an adjective which means morally good, justified, or acceptable whereas write is a verb which means to form letters or numbers on a surface with a pen, pencil, etc.

Example:
A. I can show you people all right that won’t ask to see your union card.
B. The reason I write promptly is that you may not go out of the country just now.

A woman is singular for female whereas the word women is the plural form of the word woman.

Example:
A. The woman ancestor kitchen-gardened, spun, wove, and nourished the poultry.
B. I am bound to him by ties stronger than usually bind the hearts of women.

Who’s is the contraction for who is whereas whose is a possessive form of the pronoun who and which.

Example:
A. I want to know who’s there outside in the dark.
B. Whose bag is lying on my bed?

Hear is a verb that refers to the ability to perceive sounds whereas here is an adverb of place. On the other hand, hair is any of the fine threadlike strands growing from the skin of humans, mammals, and other animals.

Example:
A. We want to hear from you about any problems you’re experiencing or witnessing in the voting process.
B. You can keep your stuff here and leave.
C. I used to have long hair during my childhood.

It’s is a short form for it is whereas its is a possessive pronoun that means belonging to it.

Example:
A. It’s your duty to inform the truth to your parents.
B. John is obsessed with this both and its author.

Your is a possessive pronoun which refers to belonging to a person or people that the speaker is addressing whereas you’re is contraception for you are.

Example:
A. I’m from Germany and you’re from Spain.
B. Have you got your textbook?

Example:
A. The guardians were authorised to emigrate poor persons, whether in receipt of relief or not.
B. The desire to immigrate, stimulated by the transportation companies, spread like a fever.

While both these words have the same meaning, they can be confusing in terms of where they are used. Defense is used in American English whereas defence is used in British English.

Example
A. Of course our team won; we had vastly superior defense .
B. There’s no defence that could have stopped that attack.

Example
A. The improvement of transport still further swelled the volume of production.
B. The nearest hospital was much farther than she thought.

A piece refers to a portion/part of something whereas peace means freedom from disturbance and tranquillity.

Example
A. This consists in placing a piece of white paper in the oven.
B. Peace can be contributed to by respect for our ability in defense.

Quiet refers to the making little or the absence of sound or noise whereas quite refers to something complete.

Example
A. The examiner asked me to remain quiet in the examination hall.
B. The fruit of which they partook freely was quite sweet and palatable.

Good is usually an adjective (a good book, a good job). Good can also function as a noun (the common good) whereas Well is usually an adverb (runs well, a well-written essay).

Example
A. There was never a good war or a bad peace.
B. The students were asked to compose a well-organized essay in 30 minutes.

Example:
A. I had brought this gift for you.
B. Happiness can’t be bought.

House Is still a house even if no one living inside it whereas Home Is a place where you live or the location.

Example:
A. The bill must still be passed by the full House and the Senate and signed by the president.
B. We’re able to build the script in our own home by ourselves.

Example:
A. I practise the piano for one hour every day because I have an exam next month.
B. I want to improve our workplace practices so that we can create a friendlier work environment.

1. What are confusing words in English?

2. What is the most confusing word in the English language?

3. What are the 32 commonly misused words in English?

4. What are confusing words called?

4 thoughts to “Confusing Words in English”