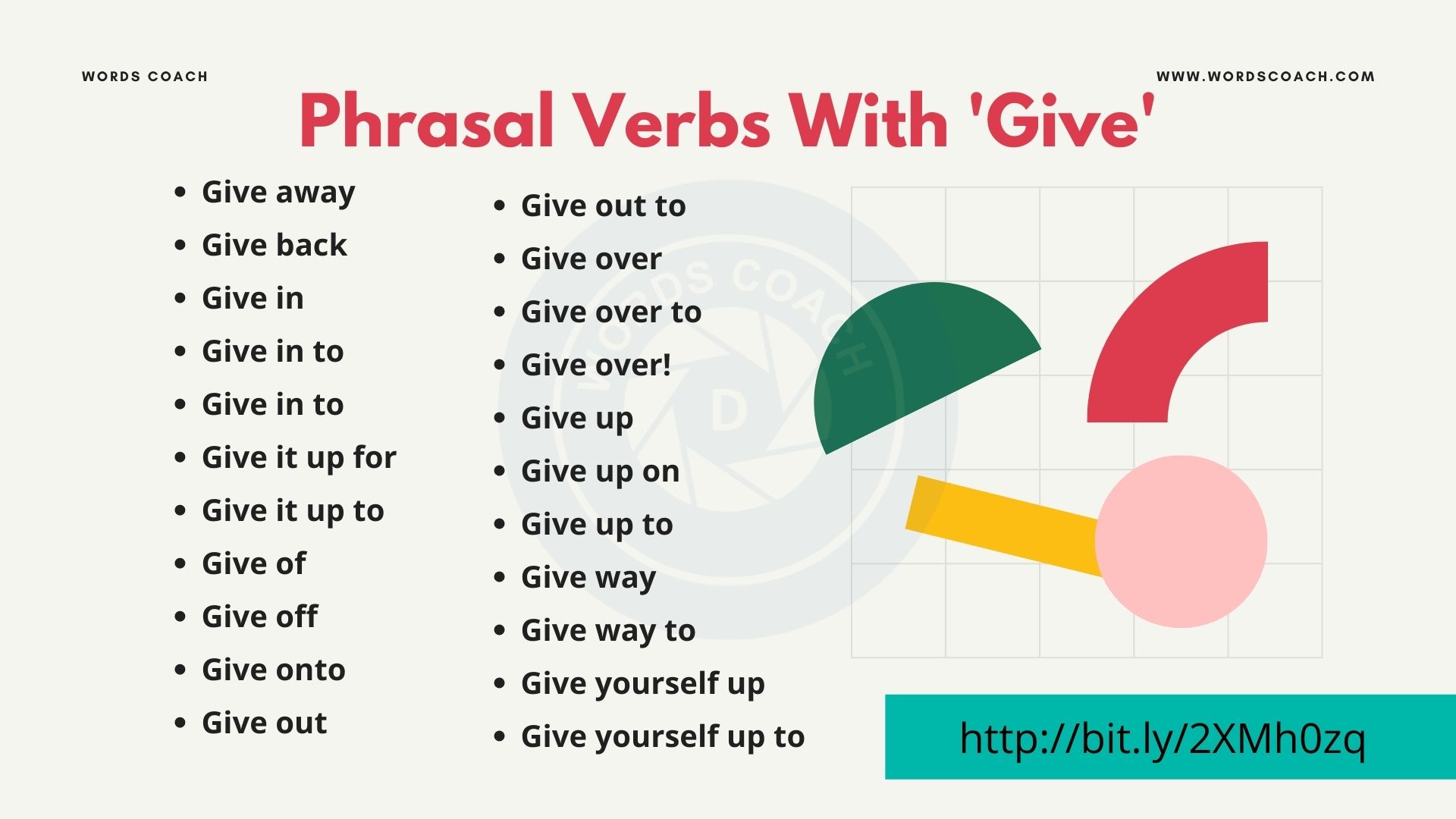 Phrasal verbs start with Give (Phrasal Verbs With Give). A Phrasal verb like Give away, Give back, Give in, Give of, Give up, Give way and more.

Phrasal Verbs With Give

Meaning: Entrust your daughter to her husband through the marriage ceremony
Example: What we acquire without sweat we give away without regret.

Meaning: Tell a secret, often unintentionally
Example: He decided to give away everything he possessed and become a monk.

Meaning: Return something you’ve borrowed
Example: Give back all what we still owe to him.

Meaning: Return something that someone has lost
Example: I had to give back a portion of the dowry after the divorce.

Meaning: Stop doing something because it’s too hard or requires too much energy
Example: This government will not give in to terrorism.

Meaning: Submit homework, etc.
Example: The defenders were outnumbered and had to give in.

Meaning: Agree to something you don’t like
Example: The government refused to give in to their demands.

Meaning: Allow a feeling or desire to control you
Example: She shouldn’t always give in to his demands.

Give it up for

Meaning: Applaud
Example: Ladies and Gentlemen, give it up for Fred Durst.

Give it up to

Meaning: Applaud
Example: Please Give it up to our next guest.

Meaning: Contribute without expecting anything in return, usually time or money
Example: Retired people are often willing to give of their time to help with community projects.

Meaning: Emit pollution or something else unpleasant
Example: The flowers give off a heady scent at night.

Meaning: Behave in a way that makes people think of you in a certain way
Example: Dark areas absorb more, are hotter, and give off more infrared radiation.

Meaning: Open into a place, for a door or window
Example: Occasionally they give onto a wide balcony that overlooks the sea.

Meaning: Distribute
Example: Banks, he said, had been overeager to give out loans.

Meaning: Stop working, through age or overuse
Example: My money was beginning to give out and there were no jobs to be found.

Meaning: Scold, tell off, nag
Example: The Jackson family set aside an additional 9,000 Staples Center seats to give out to people they choose, organizers said.

Meaning: Stop doing something bad or annoying
Example: I wish you lot would just give over!

Meaning: Entrust, pass on responsibility
Example: Give over, can’t you? I can’t work with you chattering away like that.

Meaning: Dedicate, devote
Example: These verbs mean to give over to another for a purpose such as care or safekeeping.

Meaning: An expression of disbelief
Example: I wish you lot would just give over!

Meaning: Stop doing something that has been a habit
Example: Do not, for one repulse, give up the purpose that you resolved to effect.

Meaning: Stop being friendly, end relationships
Example: In other words, she must give up singing.

Meaning: Lose faith in or stop believing in something or someone
Example: Never give up on anybody. Miracles happen every day.

Meaning: Denounce, report to authorities
Example: The rest of the evening will be given up to singing and dancing.

Meaning: Stop to allow vehicles to pass
Example: You must give way to any pedestrians on the crossing.

Meaning: Collapse, break
Example: We felt the ground give way under our feet.

Meaning: Yield, surrender, retreat
Example: When entering a roundabout, give way to any traffic already on it.

Meaning: Surrender to the police or authorities
Example: Don’t give yourself up to sadness, there’s still hope!

Give yourself up to

Meaning: Dedicate time, energy, etc, to something
Example: He gave himself up to his job.

Phrasal Verbs With ‘Get’