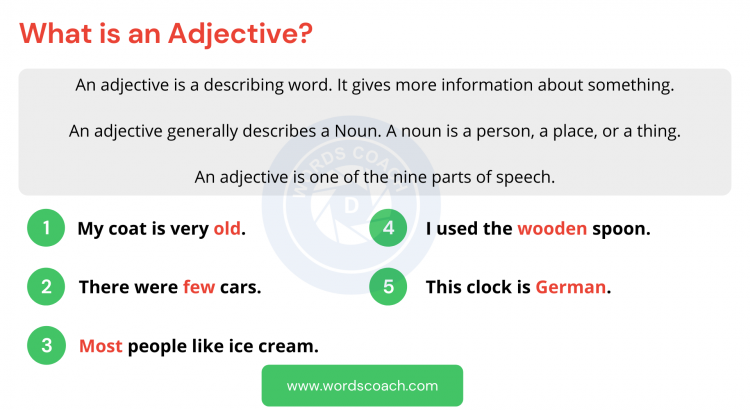 An adjective is a describing word. It gives more information about something.

An adjective generally describes a Noun. A noun is a person, a place, or a thing.

An adjective is one of the nine parts of speech.

An adjective often comes BEFORE a noun:

Sometimes an adjective comes AFTER a verb:

COMPARATIVE AND SUPERLATIVE OF ADJECTIVES

A Comparative Adjective is a word that describes a noun by comparing it to another noun.  Comparative adjectives typically end in ‘er’ and are followed by the word ‘than’.

A Superlative Adjective is a word that describes a noun by comparing it to two or more nouns to the highest or lowest degree. Superlative adjectives typically end in ‘est’ and are preceded by the word ‘the’.

As + Adjective + As is used to compare people, places, things that are the same or equal.

Not As + Adjective + As is used to make comparisons between things which aren’t equal.

5 Different Types of Adjectives with Examples

50 most common adjectives in English

What is a Clause? Definition, Examples & Types of Clauses