Home » english » Learn about Various Kinds of Pronouns with Examples 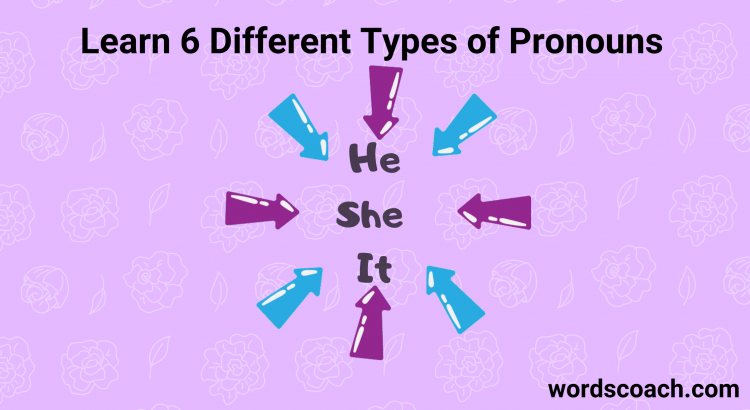 A pronoun is a word that stands in a place of a noun. Pronouns are one of the eight parts of speech. A different pronoun is required relying on the noun being replaced and the function that the noun has in the sentence. It is generally used to avoid the repeated use of nouns. Pronouns have different forms for the different ways of using it. Below is the list of 6 various kinds of pronouns with examples.

Personal pronouns are used to refer to humans and animals. It can be categorized into 1st person, 2nd person, and 3rd person in the following way:

Here, note that the pronoun You remains the same both in the singular and plural forms. The form of the pronoun changes according to the function in the sentence. Let’s look at some cases.

In this case, the pronoun is the subject of a sentence. Following are some situation where you can use subjective case:

In this case, the pronoun becomes the object of the verb in a sentence. Following are some situation where you can use the objective case:

In this case, the pronoun expresses possession.

Ex-  This pen is mine.
That bike is ours.
These toys are not hers.

A relative pronoun is used to refer to some noun going before it, known as its antecedent. It is used to introduce phrases. Some relative pronouns are who, whose, which, whom, that, what where, when, whoso, whichever, whatever whoever, and whatsoever.

Ex- I know a place which is very beautiful.
I admire a person who is successful in their career.
The pen that is on the table belongs to my friend.
I first saw her in New York where I lived for three months.

An indefinite pronoun is a pronoun that is not very clear about which noun it refers to. This pronoun doesn’t denote any particular person or thing. Some indefinite pronouns are anything, everything, something,another,  anyone, everyone, someone, no one, nothing, neither, either.

Ex- There is nothing to say now.
I was ready for anything.
Everyone needs time to unwind.
We finally moved to another city.
The were staying in someone’s apartment.

Both, few, several, and many are indefinite pronouns which are always plural while others such as all, most, none and some can be used singular as well as plural.

Ex-   may I ask a few questions?
None could match her creativity.
A few of the employees were absent from the meeting.
Several letters arrived this morning.

Ex-   This is the captain speaking.
These are the people who need medicine.
Those birds are flying to north.
That is the car I was talking about.

Ex-  Tim introduced himself as Peter.
Mrs. Bella was kindness itself.
They injured themselves.
She baked the cake by herself.

An emphatic pronoun is a pronoun that used to give emphasis on the subject. It is also known as an intensive pronoun. Both reflexive and emphatic pronouns are made by adding –self to my, him, her, your, it (Singular) and –selves to your, them, our (Plural).

Ex-   I hurt myself by accident.
She had to defend herself.
He himself paid for the car.
Some countries are unable to look after themselves.

Read other blogs on English Grammar from here

Written by,
Jaini Bhavsar (There’s always room for bliss.)
19th June 2020
Connect with me on LinkedIn