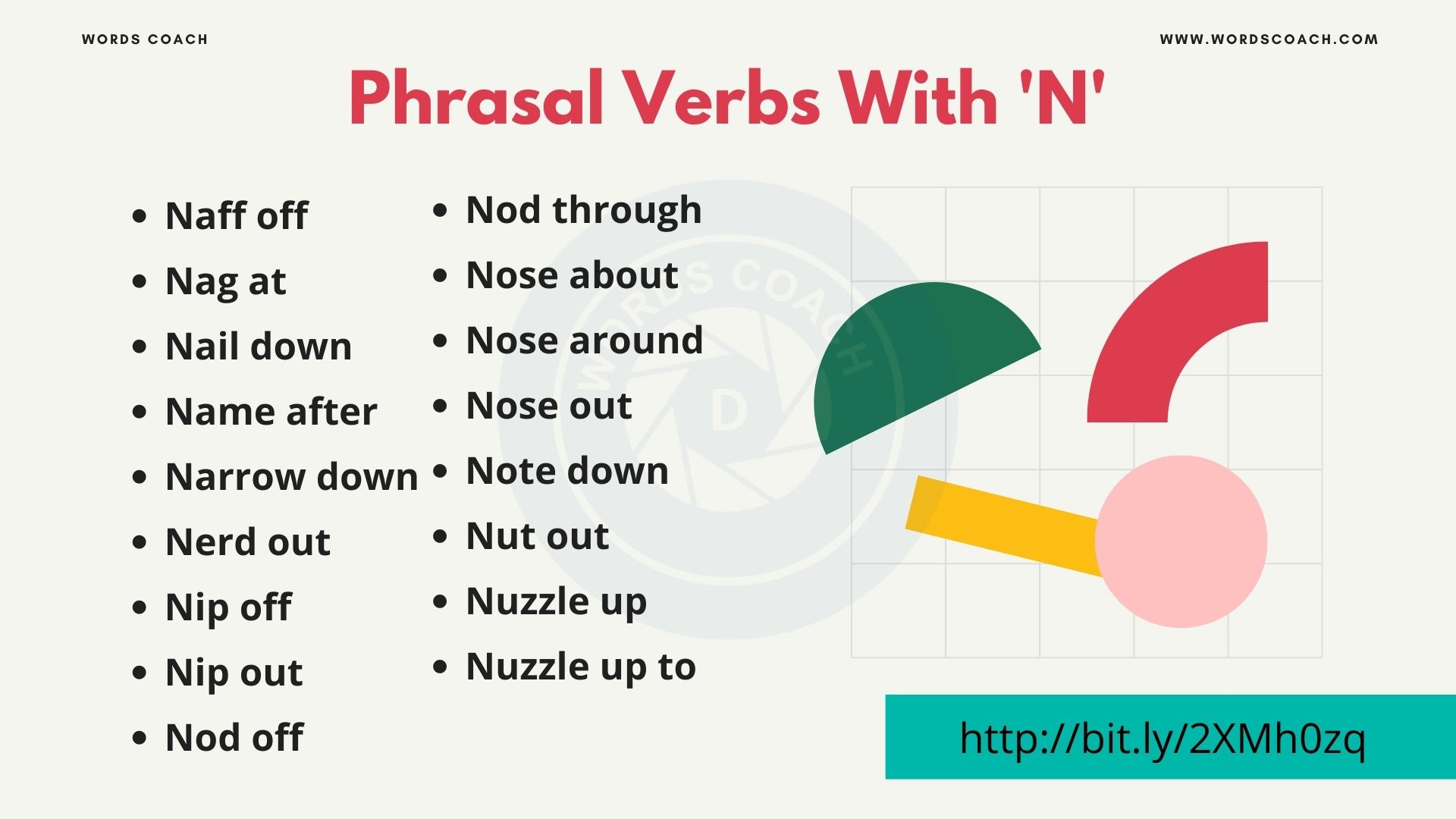 Phrasal verbs start with ‘N’ (Phrasal Verbs With N). A Phrasal verb like Naff off, Nag at, Nail down, Name after, Narrow down, Nerd out, and more.

Meaning: Get lost, go away (used as imperative)
Example: She didn’t hesitate to tell intrusive photographers to “naff off”.

Meaning: Repeatedly criticise someone verbally
Example: That perverse guy has been nagging at me all day.

Meaning: Succeed in getting, achieve
Example: It would be useful if you could nail down the source of this tension.

Meaning: Give someone a name to remember another person
Example: She resumed her maiden name after the divorce.

Meaning: Remove less important options to make it easier to choose
Example: There are easy ways to narrow down your choice.

Meaning: Play safe and avoid taking a risk
Example: I’m going to nerd out and not go on the river trip.

Meaning: Go somewhere quickly
Example: I must just nip off to the shops before the children come home from school.

Meaning: Fall asleep
Example: The judge appeared to nod off yesterday while a witness was being cross-examined.

Meaning: Pass a law, regulation, etc, without considering or debating it seriously
Example: Parliament nodded the bill through.

Meaning: Look for something hidden or secret
Example: When the man goes to bed, the sound snoring clearly is from nose about li of effluence.

Meaning: Look around for evidence
Example: Archie was bound to nose around in it, but wouldn’t interfere with the contents.

Meaning: Find out, discover- usually information, secrets, etc
Example: Our dog will nose out a rabbit anywhere it hides.

Meaning: Write something short like a phone number for future reference
Example: Note down her telephone number in case you forget.

Meaning: Find an answer to a problem
Example: The bird picked the nut out of the shell.

Meaning: ouch affectionately, especially with the nose or head
Example: The kittens like to nuzzle up against/up to their mother.

Meaning: Touch someone/something affectionately, especially with the nose or head
Example: The calf nuzzled up to her mother’s teat.