Home » Adverb » What Is an Adverb? 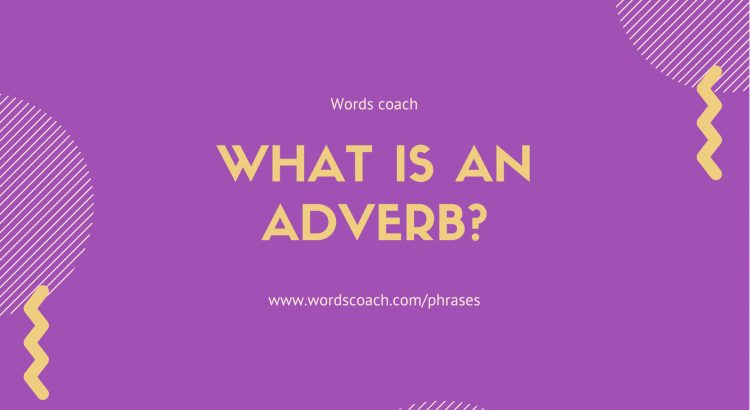 What Is an Adverb?

An adverb describes a verb, an adjective or another adverb. It tells us How, Where, When, How much and with what frequency.

An adverb is a word that describes a verb, an adjective, another adverb, or even a whole sentence. Adverbs often end in -ly, but some look exactly the same as their adjective counterparts.

The adverb can be used to modify various different types of words.

An adverb can be used to talk about how an action is happening.

The adverbs in each of the sentences above answer the question ‘how does something happen?’ or ‘In what manner does it happen?’

Adverbs can answer other types of questions about how an action was performed. They can also tell you when and where.

However, there is one type of verb that doesn’t mix well with adverbs. Linking verbs, such as feel, smell, sound, seem, and appear, typically need adjectives, not adverbs.

A very common example of this type of mixup is

Incorrect:- I feel badly about what happened.

Because “feel” is a verb, it seems to call for an adverb rather than an adjective. But “feel” isn’t just any verb; it’s a linking verb. An adverb would describe how you perform the action of feeling – an adjective describes what you feel. “I feel badly” means that you are bad at feeling things. If you’re trying to read Braille through thick leather gloves, then it might make sense for you to say “I feel badly.” But if you’re trying to say that you are experiencing negative emotions, “I feel bad” is the phrase you want.

An Adverbs also has the ability to modify adjectives and other adverbs. Often, the purpose of the adverb is to add a degree of intensity to the adjective.

Consider the phrase “She is short.” The adjective here is short, but with the use of an adverb, we can describe how short she is. Look at the sentence once it has been modified:

Here are some more examples of how an adverb can modify an adjective.

The adverb almost always modifies the adverb always, and they’re both modifying right.

Adverbs and other adverbs

You can use an adverb to describe another adverb. In fact, if you wanted to, you could use several.

The issue is that it frequently delivers feeble and burdensome sentences like the one above, so be mindful so as not to try too hard.

Adverbs to Modify a Sentence

An adverb can be used to modify a whole sentence and in this case will appear usually at the beginning. Common ones include generally, fortunately, interestingly, Luckily, and accordingly.

Some examples of this are:

At one time, the use of the word hopefully as a sentence adverb was condemned.

In some cases, you might use an adverb to make a comparison. You can do this by adding the words more or most in front of the adverb.

An absolute adverb describes something in its own right:

To make the comparative form of an adverb that ends in -ly, add the word more:

To make the superlative form of an adverb that ends in -ly, add the word most:

Place adverbs as close as possible to the words they are supposed to modify. Putting the adverb in the wrong spot can produce an awkward sentence at best and completely change the meaning at worst.

Consider the difference between these two sentences:

There are different types of adverbs expressing different meanings. Generally, adverbs tell us how, where, when, how much and with what frequency.

List of adverbs in English with different types and examples.

click here to know more about: Position of adverb

3 Degrees of Comparison with Examples

An adverb is a word that modifies (describes) a verb (he sings loudly), an adjective (very tall), another adverb (ended too quickly), or even a whole sentence (Fortunately, I had brought an umbrella). Adverbs often end in -ly, but some (such as fast) look exactly the same as their adjective counterparts.

What is an adverb for kids?

A word used to modify a verb, an adjective, or another adverb and often used to show degree, manner, place, or time The words “almost” and “very” in “at almost three o’clock on a very hot day” are adverbs.

What is verb and adverb give examples?

Verbs are action words. … For example, some common English verbs include: ‘to walk’, ‘to swim’, ‘to talk’, ‘to watch’, ‘to try’, ‘to make’, ‘to read’ and ‘to examine’. Adverbs are words that add more detail and describe verbs. Common English adverbs include ‘quickly’, ‘slowly‘, ‘cleverly’, ‘carefully’, ‘greedily’.