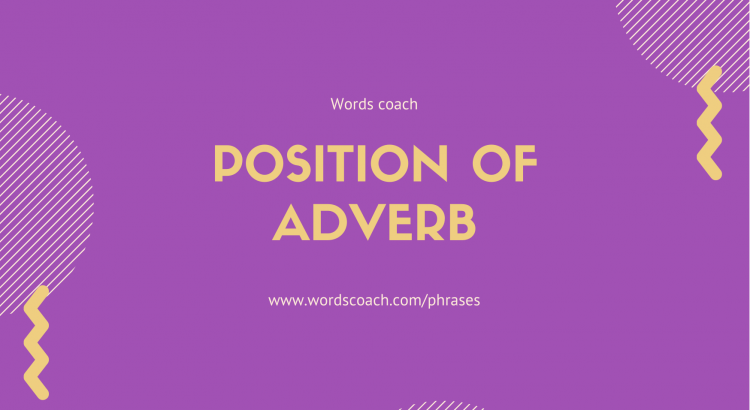 We can put adverbs and adverb phrases at the front, in the middle or at the end of a clause.

What positions can adverbs be used in within a sentence or clause?

Adverbs can be used in three positions in a sentence or clause:

The front position before the subject of the sentence. It gives information in advance, to set the scene for the action that follows.

Refer to time or frequency:

The adverb in this position is intimately connected with the verb, generally placed immediately before it. If there is an auxiliary verb, the adverb is placed between the auxiliary and main verb.

Make the meaning of a verb, adjective, or other adverb stronger or weaker:

Focus on part of a sentence or clause:

The end position is at the end of the sentence.

Refer to time or frequency:

Position of adverbs and verbs

Adverbs are often found between the subject and its verb:

They can also come between an auxiliary verb and a main verb:

3 Degrees of Comparison with Examples

What are the three positions of adverb?

Where should adverbs be placed?

Adverb placement of focusing adverbs generally takes place in the middle of a sentence, or in the ‘mid-position’. Focusing adverbs put the emphasis on one part of the clause in order to modify, qualify or add additional information.

What is the correct order of adverbs?

Remember, the order of adverbs is manner, place, frequency, time, and purpose.

What is the position of adverb of frequency?

The adverb of frequency goes between the auxiliary and the main verb. We don’t usually watch TV after lunch. They can’t always wait for you. It goes after ‘to be’.

What are adverbs examples?

An adverb is a word that modifies (describes) a verb (he sings loudly), an adjective (very tall), another adverb (ended too quickly), or even a whole sentence (Fortunately, I had brought an umbrella). Adverbs often end in -ly, but some (such as fast) look exactly the same as their adjective counterparts.

2 thoughts to “Position of adverb”