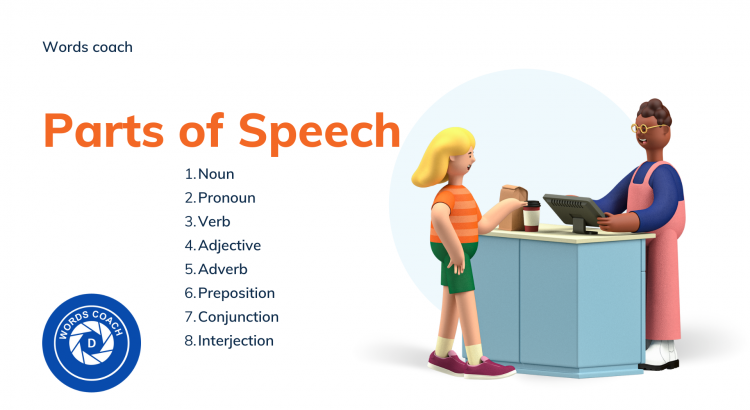 Every word is a part of speech.

The part of speech indicates how the word functions in meaning as well as grammatically within the sentence. An individual word can function as more than one part of speech when used in different circumstances.

Parts of speech are the classification of words categorized by their roles and functions within the structure of the language.

There are eight parts of speech in the English language:

Nouns are often used with an article (the, a, an), but not always. Proper nouns always start with a capital letter; common nouns do not. Nouns can be singular or plural, concrete or abstract. Nouns show possession by adding ‘s.

Nouns can function in different roles within a sentence; for example, a noun can be a subject, direct object, indirect object, subject complement, or object of a preposition.

A pronoun is used to refer to a noun/noun phrase, or nouns/noun phrases; instead of the repeated use of the same noun(s)/noun phrase(s).

The proper noun is used to name a specific item, for example the names of places or people in a movie or song title.

Pronouns are divided into a range of categories.

A verb is one of the most important parts of speech and is a word which is used to describe action or an ongoing condition. It is considered as the heart of a sentence. There is a main verb and sometimes one or more helping verbs.

Verbs that refer to feelings or states of being, like to love and to be, are known as nonaction verbs.

The verbs that do refer to literal actions are known as action verbs.

An adjective is a word which describes a noun or pronoun, there are thousands of adjectives within the English language.

Adverbs modify or describe adjectives, verbs, or other adverbs.

It usually answers the questions of when, where, how, why, under what conditions, or to what degree. Adverbs often end in -ly.

1. I entered the room quietly.
– Quietly is describing how you entered (verb) the room.

A preposition is used in English to show a relationship between two words or phrases. Preposition gives context to nouns in relationship to other nouns or pronouns.

She put the pizza in the oven.
– Without the preposition in, we don’t know where the pizza is.

Examples: after, along, above, except, from, near, before, since, about, In, on, at, according to, between, upon, with, to, toward, etc.

A conjunction is used as a way of joining two or more ideas or words together. Most commonly you will see the words for, and, not, but, or, yet and so used as a conjunction.

A conjunction connects nouns, noun phrases, clauses or sentences together.

Examples: however, or, so, after, before, either, neither, because, unless, And, since, still, but, etc.

Interjections are brief and abrupt pauses in speech, usually used for expressing emotions, reactions and excitement and have no grammatical link to anything else within the sentence they appear.